I have many “life goals” I want to achieve before my time is up. Some of these are conceptual and hard to measure, such as–be a great father, husband and family member/friend and make a positive contribution to society. Others are “check the box” in nature, such as my decades-long quest to climb 100 of the tallest peaks in Southern California. (In 15 years, I’ve climbed 54).

Today, I checked one of those boxes. My wife and I have collected Slinkies for the last 12 years. I explain why here. We now have over 300 Slinky-related items. Naturally, for more than a decade, I’ve had a burning desire to visit the mother ship, the source of my joy, Slinky nirvana–the Slinky factory.

I finally made my pilgrimage. This weekend, I am at a conference in Pittsburgh, about 90 miles from the factory. So I arranged my schedule with a free morning. Early this morning, I hit the road to Hollidaysburg, Pennsylvania.

As I drove into town, I was surprised to discover that Hollidaysburg doesn’t do anything to celebrate the Slinky. No “Home of the Slinky” sign. No Slinky-themed burger joint. No stores selling Slinky T-shirts. There were not even any signs pointing the way to the Slinky factory (in fact, it’s pretty hard to find–it was mismarked on Google Maps, and the factory is nestled between a forest and a junkyard). It’s as if the town doesn’t care that it’s home to one of the major brands in the world.

There are no direction signs in part because the Slinky factory doesn’t cater to visitors. They don’t offer tours, have a visitor’s center or provide a factory outlet/store (they used to but they closed it down). I drove past the junkyard to a poorly marked and unremarkable building, pulled off the street onto some unmarked asphalt, and walked in the door. 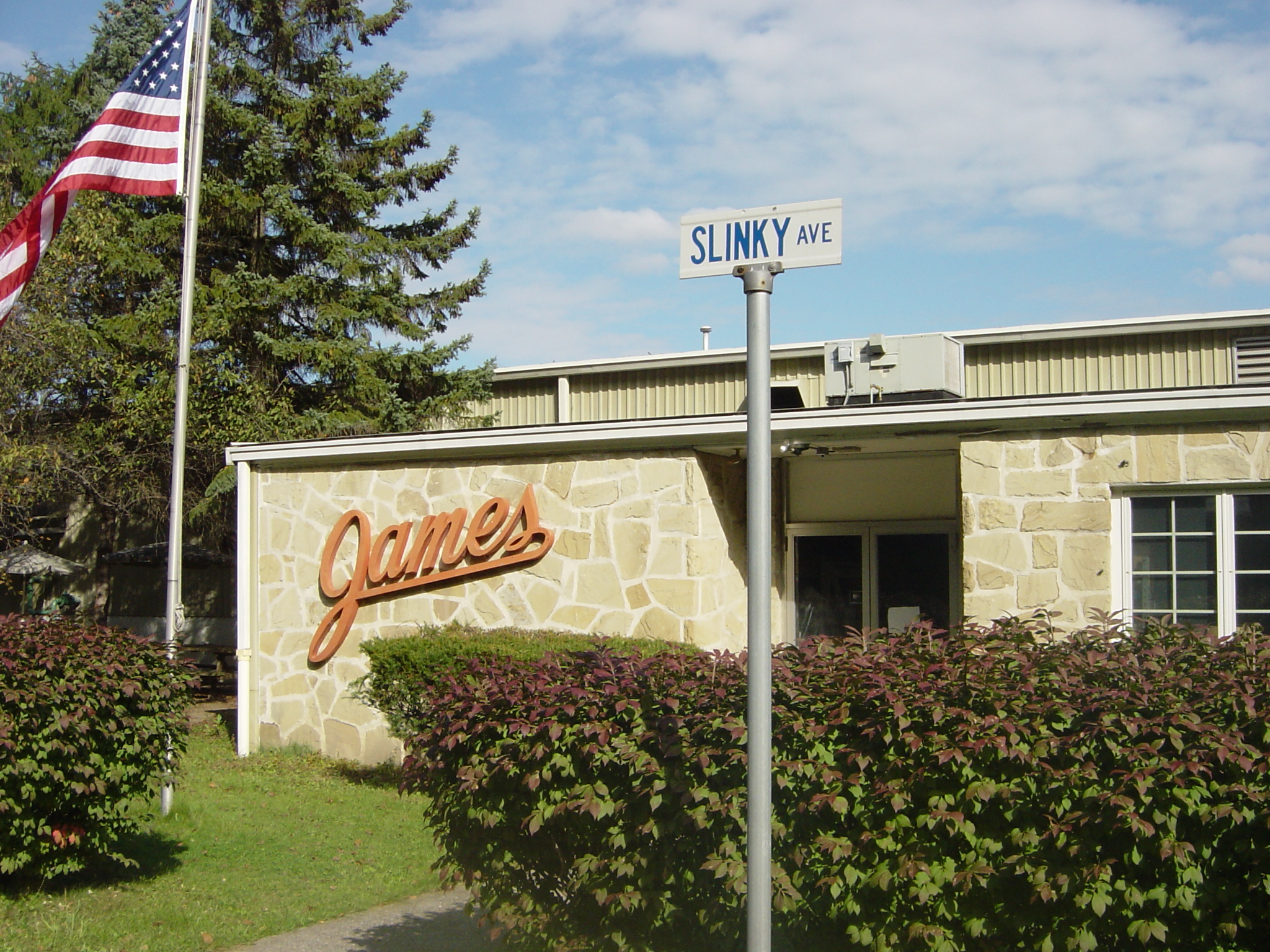 There was a display case of some slinky items in the foyer, but inside the door, there was no receptionist. On the right was a conference room with various Slinky items strewn about. On the left was a large but sparsely populated cube farm. A woman asked if she could help me. When I said that I was looking for the Slinky outlet, she told me that it was closed.

My quest could have ended there, but I took a gamble. A number of years ago, my wife had called the factory looking for an item we saw on eBay called “Slinky art” (or sometimes called “Slinky pooh”)–the extrusion of plastic Slinkies at the end of a job to clean the line. She spoke with a woman named Charlene who helped her order this as a special treat for me. I remember my wife mimicking her voice, and I had a hunch I was talking to Charlene. So I asked if she was Charlene, and that provided an ice-breaker that allowed for a little dialogue.

A man walked over and Charlene introduced him as Tom James, the son of Richard and Betty James (the inventor and initial owners of the Slinky) and the manager of the enterprise. We started chatting a little. I asked if they had any more Slinky art, and he invited me back into the factory to rummage through their bin. He issued me some goggles and off we went.

Unfortunately, the factory was relatively quiet. They manufacture Slinkies 4 days a week (20 hours/day), and I came on an off-day. They were manufacturing some third party branded Slinkies-as-schwag, so I got to see the Slinkies being “printed” and then baked. Otherwise, the factory was rather unremarkable, except it had a lot of inventory for the holiday season.

All told, Tom and Charlene generously gave me about a half-hour of their time. I walked out the door a very satisfied Slinky loyalist. I also walked out with a number of goodies: an item of Slinky art (we picked one of the smallest we could find–most of them were a couple of feet tall, too big to carry on the plane); the 14k gold Slinky in a wooden box; a not-yet-shipped colored metal Slinky in a box autographed by Betty James; some Slinky-branded coloring books; and some great memories.