Reflecting On 8 Years As HTLI Director

June 2, 2014 · by Eric Goldman · in Legal Education Industry, Life as a Law Professor 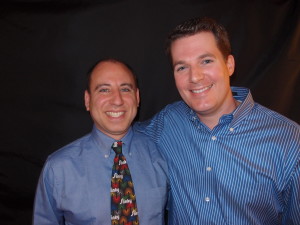 We recently announced that Brian Love is joining me as co-director of the High Tech Law Institute. This is a good news/bad news announcement. Brian is a terrific talent, and I’m thrilled to work with him. However, given that he’s still pre-tenure, Brian’s new role is a bit early. The timing is driven by my wife’s lung cancer, which has limited my ability to handle the director job. Brian is stepping up at our time of need, but I think this move would have made more sense a few years from now, not today.

Although I plan to remain integrally involved with the High Tech Law Institute as a co-director, this transition has prompted me to reflect on my activities as a director since I took the role in July 2006. Here are some of my highlights from the past 8 years:

Some of the programs we’ve added:

* Entrepreneurs’ Law Clinic. This clinic filled an obvious and long-standing gap in our high tech curricular offerings. It’s also been a foundational piece of efforts to tie together the cross-university programs for entrepreneurs.

* Internet Law Work-in-Progress Conference. There are many work-in-progress events, but it turns out that Internet law scholars really wanted and needed a venue to connect with each other.

* High Tech Graduation Brunch. One last chance for high tech students to bond with each other before they leave the nest.

* HTLI Endowment. This is an internal matter but one of my most important accomplishments. Since I arrived, I have been focused on creating a substantial endowment to fund the HTLI’s operations–a lengthy process that is finally wrapping up successfully. Even in the law school market downturn, this endowed money should allow us to maintain our services.

* Curricular reform/certificate revisions. In 2010, we made two major changes to the high tech curriculum. First, the IP Survey course became the gateway course to the high tech curriculum, rather than having students start with the standalone doctrinal courses. Second, we updated the requirements to obtain the high tech law certificate for the modern era. Both changes have been quite successful. A majority of Santa Clara Law students now take the IP Survey course, and the number of certificate earners more than doubled after the change.

* The team. I can’t claim a lot of credit for hiring either Colleen Chien or Brian Love, but both have been major additions to our program. I did chair the search committee that hired Laura Norris, and she has delivered everything we’d hoped for and more. The HTLI has two of the best professionals in the business in Joy Peacock and Dorice Kunis, and I’m proud to work with both.

* New degree programs. We added a JD/MSIS, one of the few such offerings in the nation, and we recently established a joint JD/IP LLM that ambitious students can complete in 3 calendar years.

I didn’t fully appreciate how much the director job would involve event planning. We organize or co-sponsor between a dozen and 20 events per year, so the cumulative tally over the past 8 years is “too many events to count.” Some event highlights:

* Bay Area Blawgers. Back before blogging became corporatized, we organized a series of successful face-to-face get-togethers for the early legal bloggers in the Bay Area.

* State of the Net West. Working with Tim Lordan and the advisory committee to the Congressional Internet Caucus, we had a string of events where members of Congress and other DC insiders engaged a Silicon Valley audience. Series speakers included Reps. Blackburn, Boucher, Chaffetz, Eshoo, Goodlatte, Honda and Lofgren; White House CTO Aneesh Chopra; and FTC Commissioner Julie Brill.

* IT, Ethics and Law series. This series predates me, but I love how it’s been a cross-disciplinary dialogue at the intersection of IT, ethics and law. Speakers over the years have included Julie Brill, Alex Macgillivray, Eben Moglen, Craig Newmark, Paul Ohm, Erika Rottenberg and Jonathan Zittrain.

* Passionate Patents. We had a performance of an opera about patent prosecution. Yes, really.

– Trademark Dilution Symposium. When 100 people showed up for a specialized topic like this, I began to appreciate how our audience liked geeky topics. Symposium issue.
– Carterphone and Open Access in the Digital Era. Celebrating the 40 year anniversary of the Carterphone decision was a terrific and timely conference concept (unfortunately, this one didn’t gel as well as I’d hoped).
– 100 Year anniversary of 1909 Copyright Act. Our most popular conference to date (over 250 RSVPs) on one of our most highly specialized topics (a law that had been dying for 35 years). Because we had more RSVPs than seats, we literally had people calling in favors trying to get in the door. Symposium issue (such as that it was).
– Exhaustion and First Sale in IP. Great topic, but we were slightly ahead of the curve with it. Symposium issue.
– Closed-door patent scholars workshop. Check out the roster of presenters: T.J. Chiang, Colleen Chien, Dennis Crouch, Kevin Collins, Jeanne Fromer, Peter Lee, Michael Risch and David Schwartz; with commentary from John Duffy, Jeff Lefstin, Ted Sichelman, Chester Chuang and others.
– 15 year anniversary of 47 USC 230. Perhaps my favorite event of this group. The energy at this conference was incredible. I still hear people talking about this one.
– Patent Defense 2.0. When it comes to patent litigation, Silicon Valley is primarily a defense-oriented community, and it was fascinating to watch that community come together at this event.
– Solutions to the Software Patent Problem. This conference was unusual because we didn’t try to balance the panels. Instead, we started with the premise that software patents were a problem and then asked two dozen bright thinkers how they’d fix the problem. We complemented this conference with a robust online Wired.com symposium describing many of the solutions for a lay audience. The news that Michelle Lee was hired as head of the USPTO Silicon Valley office broke at this conference.
– 15 year anniversary of DMCA. This was a great venue for the Silicon Valley Internet community to celebrate and commiserate about a law we love to hate.
– WIPIP. This conference came at an exceptionally difficult time for me as we got my wife’s diagnosis just a month before the conference. Still, the event was filled with high points from beginning to end, starting with the pre-conference venture capital pitch event and continuing through the closing karaoke night where several dozen IP professors joined in a group singalong of Aqua’s Barbie Girl.

Hallmark features of our events

We take our events seriously, and over the years we’ve developed a few signature traits: 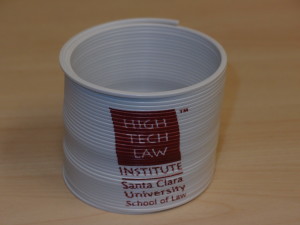 – Schwag. We love schwag! For us, good conference schwag meets strict design parameters: (1) not too heavy, (2) easy to stuff into carry-on luggage, (3) not breakable, (4) something a person would actually want to keep/use, (5) not too expensive (don’t want to violate government ethics rules), and (6) a little nerdy so as to reinforce our brand message. Mugs? No. Bags? No. Instead, over the years, our stalwart piece-o-schwag has been the highly coveted HTLI slinky. Making the HTLI slinky happen has been one of my best perks of being HTLI director. Other highlights include the SCU straws and the M&Ms with the faces of famous IP personalities.

– Party night. After we’re done with our official business, we love partying with IP academics! Highlights include WIPIP’s IP trivia contest and the legendary night of Dungeons & Dragons quests at the Internet Law WIP.

Media coverage of our program

Two of my favorite articles about the HTLI from the past 8 years: