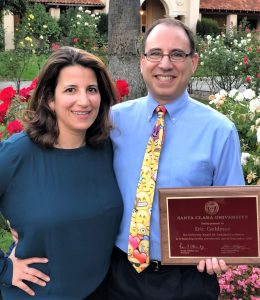 I am the 2019 recipient of Santa Clara University’s “Award for Sustained Excellence in Scholarship,” the University’s highest award for scholarly achievement by a professor who has been on the SCU faculty for more than 10 years. (I joined the faculty in 2006). Law school professors do not often receive this honor; the last time was 18 years ago. I am grateful to Deans Polden and Kloppenberg for the many ways they have facilitated my work over the past 13 years; and my family (especially my wife) for their constant love and support.

Photo album from the event.

Here’s what Interim Provost Kloppenberg said in announcing my award:

As an influential thought leader in the fields of internet and intellectual property law, Eric Goldman is this year’s recipient of the University’s highest award for scholarly achievement. His interdisciplinary research on Internet, IP, and advertising law has resulted in more than 25 articles in prestigious journals and several book chapters.

Goldman is the author of the Internet Law casebook and co-author of the textbook, Advertising & Marketing Law. His influence is widespread, as evidenced by the hundreds of presentations he has given to academics, legal practitioners, and Silicon Valley leaders. He is also one of the most downloaded authors in the Social Science Research Network.

In addition to his scholarly productivity, he is regularly quoted in prominent media outlets, has more than 10,000 Twitter followers, and is a “LinkedIn Influencer.” He was named one of “The 50 Most Influential Law Professors Alive Today” in 2013 and earned the prestigious IP Vanguard Award in the academics/public policy category from the IP Section of the California Bar in 2011. He also influences the law by testifying before Congress and policy-making groups.

← Channel Islands Restoration (CIR) Volunteer Trip to San Nicolas Island
Everyone Has Their Own Horrific United Airlines Story. Here’s Ours →
Subscribe to Blog via Email
Categories