Yesterday, I did a service trip to San Nicolas Island through Channel Islands Restoration (CIR). If you’re considering doing a similar trip, I hope this post will help you know what to expect.

The 8 Channel Islands run from approximately San Diego to Santa Barbara. The most famous is Catalina Island, which offers many tourist services. Five islands (Santa Barbara, Anacapa, Santa Cruz, Santa Rosa, and San Miguel) are part of the National Park Service and have some tourist access, except for temporary restrictions on Santa Barbara Island. I’ve been to all of the foregoing islands except Santa Barbara Island. 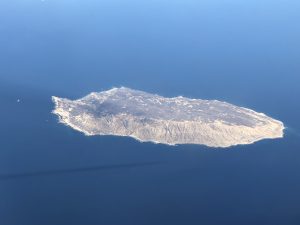 Civilians generally aren’t allowed on either San Nicolas or San Clemente. However, CIR has a contract with the Navy to restore native plants on San Nicolas Island. Unfortunately, years of misuse have afflicted all of the islands, so restoration can improve these globally significant and highly imperiled ecosystems. CIR accepts volunteers to help with its restoration projects. Volunteer spots for San Nicolas Island are in high demand, so it took a while to secure my spot.

About the Trip [Note: Trip itineraries and Navy procedures vary from trip to trip.]

We met at the Point Mugu Pass and ID Building (116 Naval Air Road) parking lot at 5:45 am, then caravaned to the Las Posas gate. The security officers confirmed our names on the list, then we parked in the lot across from the unassuming “terminal” building on Ronald Reagan Avenue. A private contractor operates the flights to San Nicolas Island, and the no-hassle terminal check-in process reminded me of flying pre-9/11. While waiting for the departure, we thoroughly cleaned our shoes to remove any potential contaminants. This would be a good trip to bring less-dirty shoes/boots to. The plane was 2 engine turboprop that seats about 40. The flight left at 7 am and took about 25 minutes.

Once we landed, a shuttle van drove us a few miles to “Nictown,” the primary base on the island, where CIR’s nursery is located. Across the street is the Ship’s Store (with a limited supply of San Nicolas Island-branded gear) and bathrooms with running water. The nearby galley might be a place to get a meal, but I preferred to bring my own lunch. Everything on the island is cash-only.

We arrived at the nursery around 7:40 am, had an orientation, celebrated the broadcasted flag salute at 8am, worked, took a short bathroom break/visit to the Ship’s Store, worked, took a lunch break, and worked some more. I potted catci and vines and cleaned seeds. The shuttle picked us up from the nursery at 1:30 for a scheduled 2:30 flight back to Point Mugu. I was in my car before 3.

In addition to the trip leader, there were 7 volunteers. This volunteer group was mature (the youngest participant was probably 40), highly educated, and professionally successful. We all got along great and everyone took their volunteer responsibilities seriously. Many hands make light work.

Even in Nictown, the island was quiet and peaceful. Many flowers were still out, but the coreopsis blooms were done for the season. Weather on the island was pleasant–high 50s, overcast, with light winds. Below the marine layer, we could see Santa Barbara Island. We spotted a few elephant seals and heard some sea lions barking. Unfortunately, I don’t have any photos from the trip. The Navy bans both cameras and cellphones.

The Channel Islands are a national treasure. Despite years of land abuse, they remain some of the best places to experience what pre-statehood California must have been like. With some TLC, the islands can get even closer to a pristine state. I was grateful for the opportunity to advance that cause.

Prior posts about the Channel Islands

Photo albums from the Channel Islands

← Order a Custom Pet Portrait By My Daughter
Some Personal Good News: I Received SCU’s Highest Award for Scholarly Achievement →
Subscribe to Blog via Email
Categories